One colony (20,000 to 30,000 bees) of these amazing creatures can pollinate up to one acre of fruit trees. What's more, honey bees pollinate roughly 80 percent of the world's food (Huff, 2013).  The evidence is clear.  Without honey bees, life as we know it would become very different.  Most of the foods we enjoy would simply disappear, such as fruits, vegetables, nuts, and - of course - honey.  According to Keith Deleplane, University of Georgia bee specialist, "An estimated one-third of the entire human diet can be traced back to bee pollination" (as cited in The Columbia County News-Times, 2013).

Vital to The Economy

The mere fact that honey bees pollinate one-third of our food supply is astonishing.  A natural side-effect to this, is honey bees sustain life by stimulating our economy.  An article written in The Columbia News-Times explains, "The estimated annual value of honey bee pollination to U.S. agriculture is more than $9 billion (2013).  This is a staggering number when you consider just how much the loss of $9 billion would impact the U.S. Economy.  In addition, honey bees produce $150 million in honey annually, another chunk of the economy.

The loss of the honey bee would have devastating effects upon the world.  Think about it.  If we lose 80 percent of our food supply, widespread famine would occur and food prices would skyrocket, overwhelming an already fragile economy.  Some have even wondered if humans would cease to exist.  We can adapt, but it wouldn't be easy.  The honey bees allow us to enjoy the quality of life we have come to expect in the 21st century.  In fact, we could learn from this little six-legged creature.  Honey bees sustain life through constant work and cooperation.  Something that seems to be lacking in today's world.

Huff, E. (2013, July 14). The story of honeybees and their importance in sustaining life. NatralNews. Retrieved June 20, 2014, from http://naturalnews.com.041194_honeybees_neonicotinoids_pesticides.html

So, just how do honey bees sustain life?  Well, for one, honey bees - along with birds, bats, beetles, and butterflies - are natural pollinators.  Without pollination, plants and flowers would not be able to reproduce.  Sure, man has devised artificial pollination techniques, such as auxin sprays.  But none of these methods compare to what our natural friends can do.  Honey bees sustain life through natural pollination.  What's even, better they do all of the work.   Who could beat that? 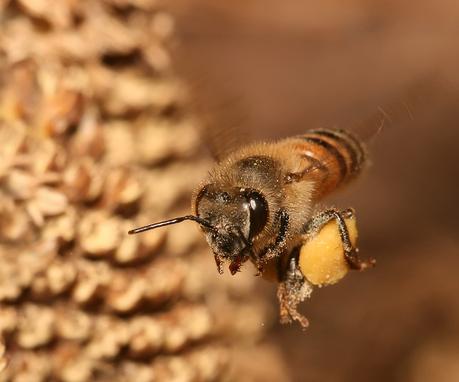 We humans have an ego problem.  We tend to think that the world revolves around us.  After all, we are the dominant and most intelligent species on the planet.  Our civilization has advanced so far that we have even ventured into space and have invented artificial gadgets and gizmos that do the thinking for us.  Have we become so caught up in our own greatness that we have failed to recognized the little things that got us to where we are today?  By little, I mean honey bees.  Moreover, honey bees sustain life.